POLITICIANS burst into applause after voting to declare independence from Spain ahead of Madrid’s vote on whether to impose Article 155.

Catalonia’s parliament has voted to declare independence from Spain.

Spain’s prime minister Mariono Rajoy appealed for calm after the vote, saying the rule of law will be restored in the region.

Before the vote he warned the region would face the consequences of a “clear violation of laws” if the Catalan lawmakers passed the vote for a split from Spain.

Rajoy’s majority government threatened it would immediately sack Catalonia regional president Carles Puigdemont and his ministers, should the government be allowed to trigger Article 155 of the constitution giving Madrid complete control over Barcelona.

Article 155 allows the government to take “all measures necessary” to intervene directly in the running of an autonomous region in the event of a crisis.

It has never been used before.

It passed with 70 votes in favour, ten against and 2 blank ballots.

Ministers stood, clapped and sang the Catalonian national anthem immediately after the result was announced.

Thousands celebrated the vote in the streets as they heard the announcement, singing “Out, out, get the Spanish flag out.”

Many deputies in the 135-seat chamber had walked out in protest before the vote took place. The assembly’s legal team had warned that the vote would be illegal.

This throws Spain even further into crisis as Prime Minister Rajoy says he will press ahead with a vote on whether to impose Article 155 or not.

Tweeting immediately after the result, Mr Rajoy said: “I ask for all Spanish people to remain calm. The rule of law with restore legality to Catalonia.”

Madrid will vote later today on whether to take control of Catalonia after Spanish PM Mariano Rajoy accused Catalonian separatists of “mocking democracy”.

Mr Rajoy addressed the Spanish Senate this morning to discuss the government’s application of Article 155 of the constitution, which allows the central administration to take over a region when it breaks the law. 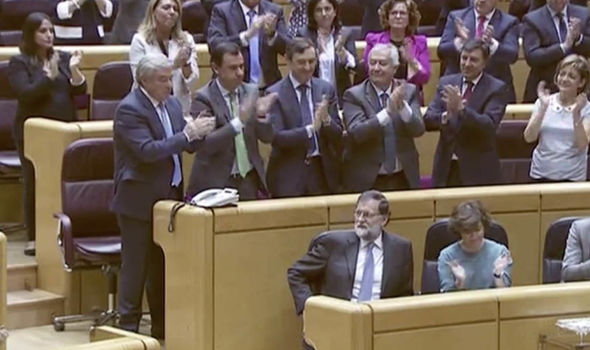 The Prime Minister said: “Article 155 is not against Catalonia but to prevent the abuse of Catalonia.”

Speaking of the separatist leaders, he said: “They have made anti-democratic decisions that violate the law and normal behavior in any democratic country, and contrary to Spanish and European values in that they are crushing minorities and violating the rule of law.

“An autonomous community that does not recognize the laws we have all given ourselves, that has replaced one legal framework with another, that ignores court decisions: this is what has happened in Catalonia.” 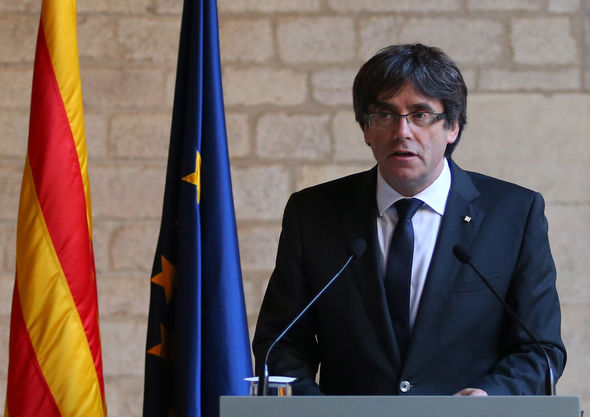 Speaking to the ministers he said: “We ask your vote now, ladies and gentlemen, to return to legality. A country where the rulers rebel against the law is an unjust country.”

Adding that there is “no alternative” to imposing Article 155, suggesting countries such as France and Germany would act similarly.

Mr Rajoy explained they didn’t impose Article 155 earlier because the government thought things would settle down. Mariano Rajoy added that after Puigdemont made a declaration of independence on October 10, then placed it on hold, “sociological studies show that half the population believed that independence had been declared, while the other half thought it had not. “No government, in any country, can stand by and passively watch something like this unfold.”

He accused the Catalonian regional government of lying, saying: “Contrary to what they told the citizens of Catalonia, this does affect the economy.”

Senate ministers stood and gave Mr Rajoy a rapturous applause after his speech. 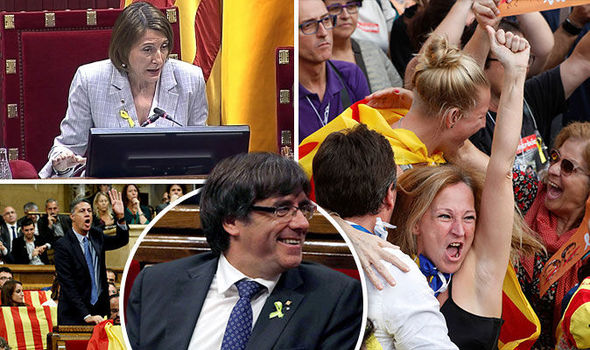 Now, the Senate must vote in favour of imposing 155. This will take place at 1pm BST.

Rajoy is then expected to hold a meeting of his cabinet to adopt the first measures to govern Catalonia directly. This could include sacking the government and assuming direct supervision of Catalonia’s police forces.

What could happen simultaneously in the regional parliament of Catalonia is unclear.

When he ruled out a snap regional election on Thursday, Catalonia’s president Carles Puigdemont said it was now up to the Catalan parliament to move forward with a mandate to break from Spain following an independence referendum on October 1.

Pro-independence supporters gathered in the city and protested outside the parliament as Mr Rajoy spoke.

The October 1 vote was declared illegal by Madrid and national police used heavy-handed tactics to try to stop it.

Puigdemont made an ambiguous declaration of independence on Oct. 10, which he immediately suspended to allow for talks with the government.

But no discussions were held and Puigdemont later spurned an invitation to appear before the Senate to explain his position.

The Catalan assembly could decide to simply lift this suspension, make a more explicit declaration of independence or put a formal motion to split from Spain to a vote.

None of these options is expected to have any direct consequence as Spain’s constitutional court would immediately block any claim for statehood and other countries have made clear they would not recognise Catalonia as an independent state.

Article 155, of the Spanish constitution, is the ‘nuclear option’ which will allow Spain to seize back some powers from Catalonia.

The deeply controversial use of Article 155 could lead to a constitutional crisis and mass protests in Catalonia.

Catalan politicians and lawmakers had met for hours throughout Wednesday night and Thursday morning, trying to craft a common response to the threat posed by Article 155.

It was thought Catalan regional president Carles Puigdemont would call an election, but last night he confirmed he wouldn’t.

2,739 responses to “Catalonia’s parliament votes for independence from Spain”