Boris Johnson has given a passionate speech to his party conference, telling delegates he is to offer the EU “constructive and reasonable” Brexit proposals later today, as he aims to break the deadlock.

In his first Tory conference speech as party leader he said his position is a compromise that he hopes will provoke concessions from Brussels, otherwise he said a no-deal is coming.

“This is a compromise by the UK and I hope very much that our friends understand that and compromise in their turn.”

The prime minister told party members in Manchester he is a “one nation Tory” in a bid to distance himself from the hardline politics he’s recently been associated with.

But he didn’t shy away from repeating his Brexit message, telling the conference “we can, we must and we will” get it done.

Mr Johnson, concluding his speech, said: “Let’s get on with a sensible, moderate, one nation but tax-cutting Tory government and figuratively if not literally let us send Jeremy Corbyn into orbit where he belongs.

“Let’s get Brexit done and let’s bring our country together.”

His speech comes ahead of a phone call with European Commission president Jean Claude-Juncker, where he is set to make a “very good offer”.

He says it will solve the issue of the Northern Irish backstop, but Mr Johnson has told ITV News he’s not sure the EU will accept.

ITV News Political Editor Robert Peston says the initial reaction from EU nations is that they “can’t accept what they understand to be Boris Johnson’s Brexit offer”.

But DUP leader Arlene Foster – whose party props up the Tory government, said the prime minister will make a “sensible and balanced” offer.

She says if the EU rejects the proposal, then “we will be entering into the realm of no deal”.

Ahead of his speech, hundreds of people formed a huge queue outside the conference centre, with some people waiting from 5.30am to hear the prime minister speak.

Aside from pushing his Brexit message in his first conference speech as prime minister, Mr Johnson claimed the Conservatives are the party of the NHS.

Mr Johnson restated his pledge to build 40 new hospitals over the next 10 years.

He said: “We are not only recruiting more doctors and nurses, and training them, but in the next 10 years we will build 40 new hospitals in the biggest investment in hospital infrastructure for a generation.”

The PM added: “It is time for us to say loud and clear, we are the party of the NHS.”

On his vision for Britain, the PM said the Tories wanted a “a country that is open, outward-looking, global in mindset and insisting on free trade”.

“A high wage, low tax, high skill, high productivity economy – with incomes rising fastest for those who are lowest paid.”

Responding, shadow chancellor John McDonnell tweeted: “How dare Boris Johnson offer more tax cuts to the rich and corporations when 726 homeless people died on our streets last year, 4.5 million children are living in poverty and wages are lower than 2008.

“This was a speech to a small right wing cult called the Conservative Party.” 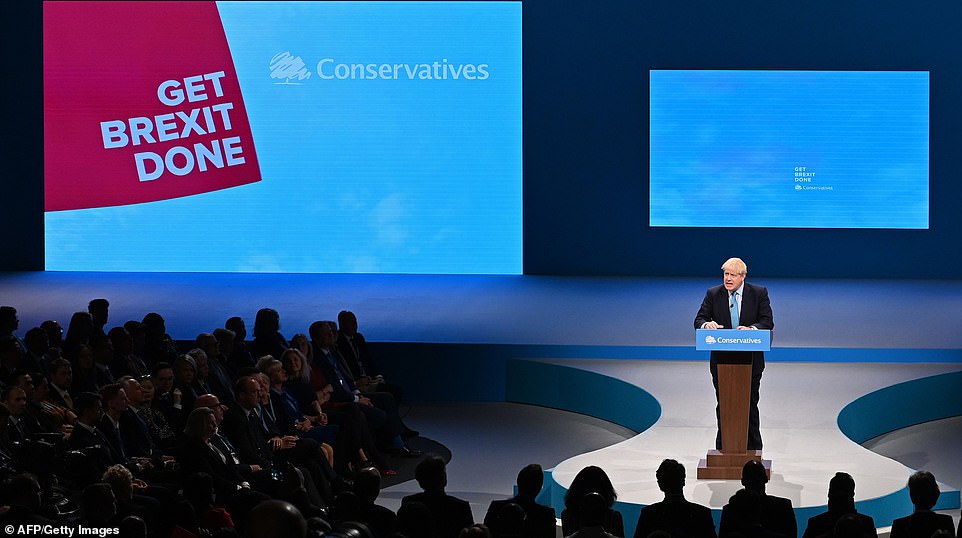 Reiterating the need to get Brexit done in the coming weeks, Mr Johnson added: “Let’s get Brexit done on October 31 because we have to get on and deliver on all the priorities of the people, to answer the cry of those 17.4 million who voted for Brexit.

British officials have made clear to EU counterparts that the legal texts which will be presented to the European Union are a final offer and unless Brussels is prepared to engage there will be no more talks until after Brexit.

The Prime Minister restated his commitment to the October 31 date despite legislation aimed at preventing him taking the UK out of the EU without a deal unless he has the consent of Parliament.

He said: “Voters are desperate for us to focus on their other priorities – what people want, what Leavers want, what Remainers want, what the whole world wants – is to move on.

A senior Number 10 official said: “The Government is either going to be negotiating a new deal or working on no deal – nobody will work on delay.

“We will keep fighting to respect the biggest democratic vote in British history.”

In a message to MPs seeking to prevent the Prime Minister leaving without a deal on October 31, the source said: “The EU is obliged by EU law only to negotiate with member state governments, they cannot negotiate with Parliament, and this government will not negotiate delay.”

There were some lighter moments in Mr Johnson’s speech, with the prime minister revealing, to the shock of his father Stanley, that his mother voted Leave in the EU referendum.

After making the admission, the PM’s dad could be seen to say: “I didn’t know that.”

And in another humorous push for Brexit, Mr Johnson spoke of “one of the many bizarre features of the SNP”.

He said: “In spite of being called names like Salmond and Sturgeon they are committed to handing back control of those fish to the EU.”

He said the UK needs to get Brexit done to take back control of its fisheries.

Ahead of the election he wants – but has so far been unable to call – Mr Johnson turned his fire on Jeremy Corbyn.

“Can you imagine another three years of this? That is the Corbyn agenda – stay in the EU beyond October 31, paying a billion pounds a month for the privilege, followed by years of uncertainty for business and everyone else.”

Myanmar should be more generous, compassionate

1971 liberation war the people of this land witnessed the brutal killing of 3 million people, displacement of 30 million citizens

Let me call it the ‘Bangladesh Secret, Sheikh Hasina Miracle’

Inauguration of the Sustainable Apparel Forum 2019